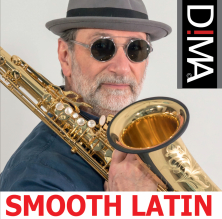 D!MA Mondello is an accomplished saxophonist and recording artist. He has over 30 years of experience in jazz, pop and classical music and is an award-winning producer/composer.

Born in Bedford, England, he studied saxophone, flute, clarinet and piano at the R.M School of Music at Kneller Hall in London, where he also learned composition and conducting. In 1994, he made his musical breakthrough as a guest soloist on the R'n'B album "Route 66 - The Great Originals with the Kansas City Blues", with the song "Sweet Home Chicago".

For the last 30 years he has lived in his adopted hometown of Celle/ Germany just outside Hanover. Mondello has been involved in many projects with Bertelsmann AG, Warner Bros' and LEE Germany.

He has been featured with his band as a warm-up artist for stars and TV celebrities such as Liza Minnelli, Michelle Hunziger, Carlo von Tiedemann and Harald Schmidt and has performed with legendary saxophonist Herb Geller and saxophonist Lee Konitz, flamingo guitarist Rafael Cortès, Janice Harrington, Chloe Agnew from Celtic Woman, musician and conductor Renè Giessen and opera singer Latchezar Pravtchev.

His artistry as a saxophonist has earned him a place in the "Who's Who In The World" reference encyclopaedia and as a producer and composer he was awarded the VDMplus (Association For German Music) Music Production Award in 2018 for his composition 'Sehnsucht' from the album of the same name.